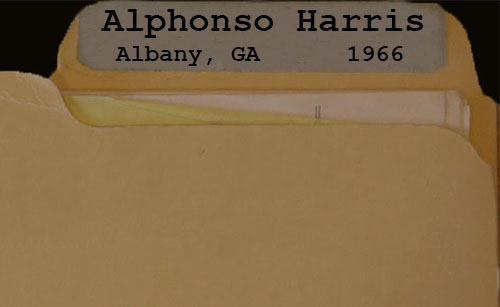 In a 2010 letter from the FBI to Alphonso Harris’s surviving family, an investigation determined that Harris died in an altercation at an Albany club. The FBI told the Harris family that his death did not appear to be racially motivated, so was not under the purview of the Emmett Till Unsolved Civil Rights Crime Act of 2007. However, the Southern Poverty Law Center lists Harris in its display about “the Forgotten”: civil rights martyrs whose deaths remain ambiguous. The SPLC found that Harris was a member of the Southern Christian Leadership Conference, and he died on Dec. 1, 1966, possibly in connection with his work in organizing a student walkout protest. The SPLC notes that Harris was killed in Georgia because of his civil rights activity.