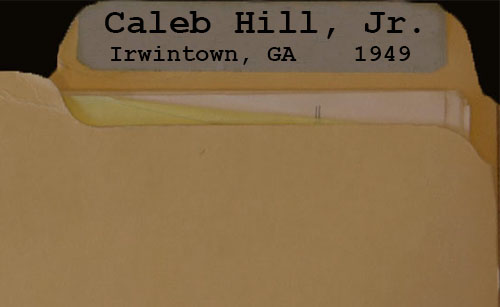 Caleb Hill Jr. of Irwinton was pulled from Wilkinson County jail in the middle of the night on May 30, 1949, and was shot to death by a lynch mob. Sheriff George Hatcher had arrested Hill for stabbing another black man. According to Hatcher, Hill had removed Hatcher’s gun while the sheriff was questioning a witness and attempted to shoot him. The next morning, Hill’s body was found on the side of a road — three miles from the jail. The GBI initiated an investigation and brought charges against two white men, Dennis Lamar Purvis and Malcolm “Mack” Vivian Pierce, but an all-white grand jury refused to indict. The FBI investigated the case, interviewing about 165 possible witnesses, but met hostility from both the GBI and the local community. The case remains unsolved and Hill’s death certificate (where his name was spelled Calib) remains the final word: “…shot through the head by hands unknown.”