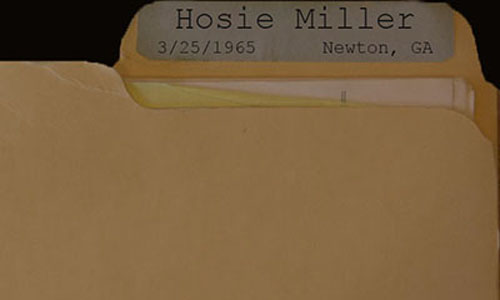 Hosie Miller, a farmer in Baker County, was shot in the back by a neighboring farmer, Cal Hall, Jr. Some of Hall’s cows had wandered onto Miller’s property. According to the results of an FBI investigation, Hall tried to take one of Miller’s cows and Miller objected. Hall then fatally shot Miller in front of three witnesses on March 25, 1965. An all-white jury refused to indict Hall. After a second unsuccessful attempt to bring murder charges against Hall, the Miller family enlisted Albany civil rights lawyer C.B. King, who had partnered with Atlanta attorney Donald Hollowell on the James Brazier suit, to file an ultimately unsuccessful wrongful death lawsuit against Hall. This case regained prominence in 2010 when Miller’s daughter, Shirley Sherrod, was controversially terminated from her position at the U.S. Department of Agriculture when a conservative blogger posted a tampered video that misrepresented her views and made her appear racist.  Shirley Sherrod is married to Charles Sherrod, who in the 1960s was leader of the Student Nonviolent Coordinating Committee in southwest Georgia; he focused considerable attention on voter registration in Terrell County.