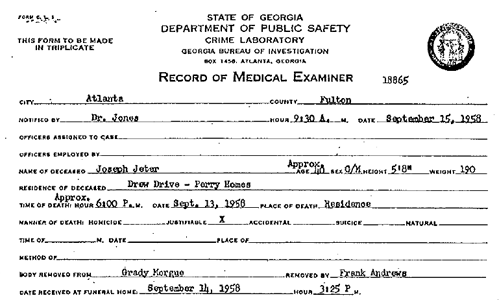 Weeks of tension between police and residents of the Perry Homes housing project in northwest Atlanta peaked on September 13, 1958, when several hundred residents protested police handling of a suspect. By the time the confrontation was over, Officer W.O. Dempsey had shot Joseph H. Jeter, superintendent of buildings and grounds at Perry Homes, through the chest, killing him. Perry residents said they had been pleading with police to stop pistol-whipping the suspect in the back seat of a police vehicle and that Jeter was shot as he tried to explain that the pleas were coming from responsible adults. But police said Jeter, 40, and others had tried to wrest the suspect from them and threatened them. A Fulton County grand jury concluded Dempsey acted in self-defense. But a citizens committee that included Rev. Martin Luther King Sr., developer Herman Russell, Morehouse President Benjamin Mays, Atlanta Daily World Publisher C.A. Scott, and businessman Jesse Hill Jr. said they believed the shooting was unjustified. ​