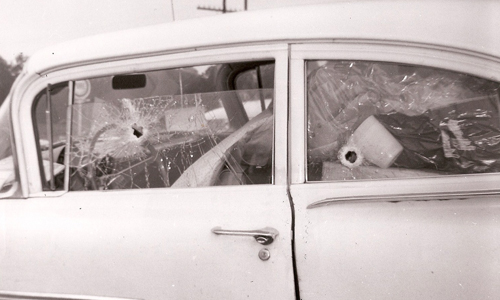 On July 11, 1964, nine days after President Lyndon B. Johnson signed the historic 1964 Civil Rights Act, Lt. Col. Lemuel Penn and two friends – all World War II veterans — wrapped up their Army Reserve camp at Ft. Benning and decided to drive all night back to their homes in Washington, D.C. Outside Athens, Penn, an assistant superintendent in the Washington schools who had three young children, had just taken over the driving duties when a station wagon began tailing them, then pulled up next to their car as it crossed the Broad River Bridge separating Madison and Elberton counties. A shooter fired two shots from the station wagon, killing Penn, 48, instantly. FBI agents investigated the case for weeks, and state prosecutors sought charges of first-degree murder against Cecil Myers and Joseph Howard Sims, two of the three local white men who were in the car. After a state trial, an all-white jury acquitted the two men. Federal prosecutors then brought charges of conspiracy to threaten another person’s civil rights against Myers, Sims, and four other local Klansmen. Although the four other men were declared innocent, Myers and Sims were sentenced to ten years in prison for conspiracy charges, but not for murder.