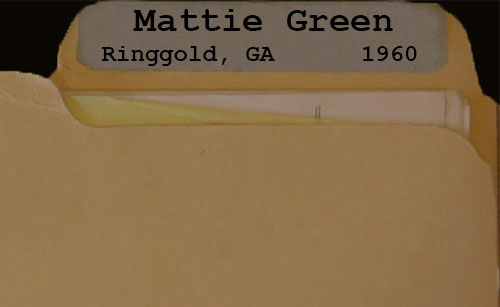 Mattie Green, a 32-year-old mother of six, died from the impact of a bomb that exploded under her family’s home on May 19, 1960, in Ringgold. Her husband and son were both injured in the explosion. Although Gov. Ernest Vandiver posted a $500 reward for information in her death, investigations never revealed the perpetrator. Possible explanations for the seemingly random bombing include recent KKK activity in the area and the possibility that the bomb may have really been intended for a neighbor who had been in an altercation with several young white men. Although Mattie Green’s husband, Jethro Green, had connections to the local NAACP, the Green family was not known for civil rights activity or showing what white residents might have considered “uppity” behavior. The FBI investigated the Green case more thoroughly in 2009, but never officially uncovered the real motive for Mattie Green’s death.