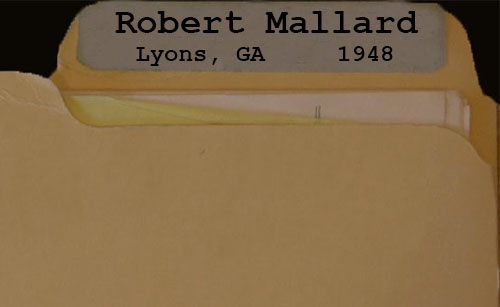 On Nov. 20, 1948, Robert “Duck” Mallard was driving to his home in Lyons, Toombs County with his wife, son, and two relatives when his car was stopped by a group of about twenty men wearing white robes. When Mallard’s wife, Amy, recognized one of the men, the group opened fire on the car, killing Mallard. When Toombs County Sheriff R.E. Gray arrived at the scene, he searched Amy Mallard instead of searching for suspects. Governor Herman Talmadge ordered the GBI to investigate the case. GBI agents subsequently showed up at Mallard’s funeral and arrested Amy Mallard for her husband’s murder. They detained her for nine hours before letting her go. Although five white men surrendered in the case and two were indicted, no one was ever convicted for the crime since the county dropped the charges. Mallard’s family moved to Buffalo, New York, and the Ku Klux Klan allegedly burned down their old home in Lyons.