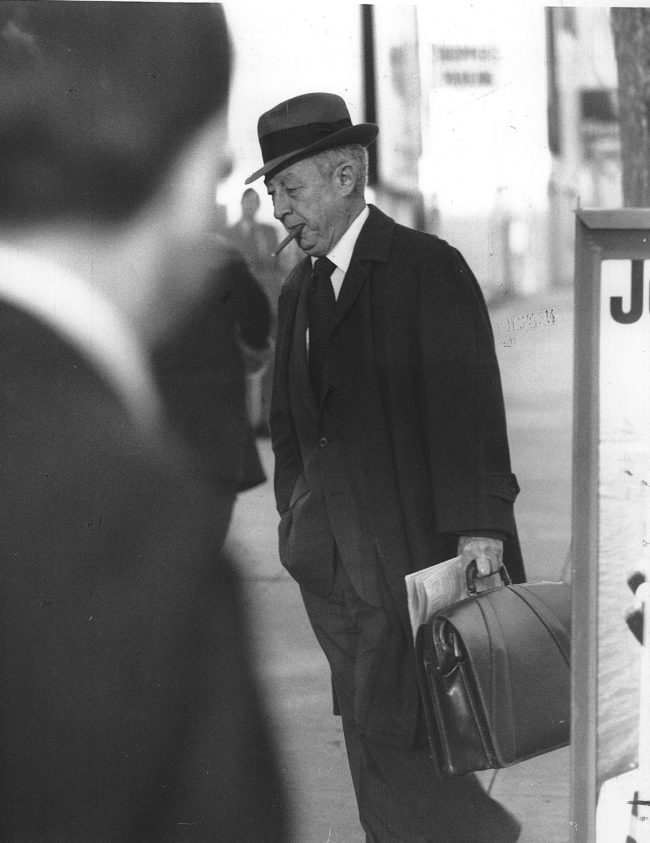 The Judge: A Predictable Outcome in a Segregationist’s Courtroom

Only four months into his lifetime appointment as a federal judge in Southwest Georgia in 1962, J. Robert Elliott came face-to-face with history. Though he was a staunch segregationist – “strident,” one prominent historian would later write[1] – Judge Elliott had managed to win the approval of the Kennedy White House and Justice Department for a federal judgeship at a critical time and place in the life of the civil rights movement: 1962, Albany, Georgia. 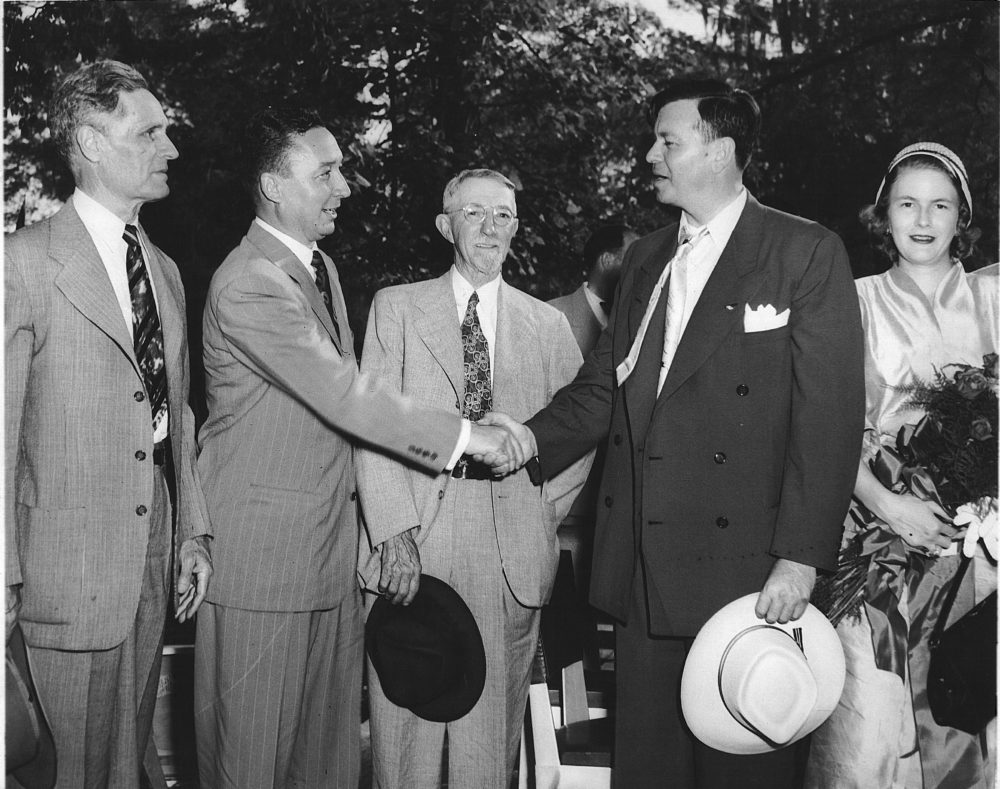 Elliott, who was a longstanding friend and political ally of U.S. Sen. Herman Talmadge, won Talmadge’s endorsement, surprising support from some of the state’s black leaders, and Senate confirmation on February 7, 1962; he was sworn in on March 15, 1962, to serve the vast Middle District of Georgia.[2] He would be assigned Hattie Bell Brazier’s civil lawsuit against Dawson police officers Weyman B. Cherry and Randolph E. McDonald and Terrell County Sheriff Z.T. (Zeke) Mathews. But even before that trial would begin, Judge Elliott would signal in another case of even greater historical importance that the weight of southern history would ensure a guiding force in his decision-making.

Elliott had not previously been a judge of any kind when Talmadge called him about the federal judgeship.  He had graduated from Emory University, then Emory Law School, and had become an attorney and politician in Columbus, Georgia.  When Herman Talmadge was governor, Elliott had served as his floor leader in the Georgia General Assembly.  As a National Democratic Committeeman for Georgia in 1948, Elliott had criticized his own party’s president,  Harry S. Truman, and federal legislation to ban lynching and eliminate the poll tax, and he had opposed creation of a Fair Employment Practices Commission. He supported Georgia’s U.S. Senator Richard Russell for the Demoratic nomination for president in 1948 and 1952; when that didn’t go anywhere in 1948, he supported the Dixiecrats, formed by disaffected Democrats of southern states who opposed the civil rights programs of the Democratic Party.[3] In his 1952 Georgia House campaign, he expressed dissatisfaction with attempts to end the all-white primary: “I don’t want those pinks, radicals and black voters to outvote those who are trying to preserve our own segregation laws and other traditions.” He stepped down from his position as Democratic National Committeeman of Georgia in 1956, and refused to go to the 1960 convention in Los Angeles, where he was made a delegate by Governor Ernest Vandiver.  He said the Los Angeles convention was “too far, too hot, and too frustrating.”[4]

As Elliott was assuming the bench and settling into an office where he would prominently display a portrait of his hero, Confederate General Robert E. Lee,[5] local civil rights forces in Albany were pressing for access to downtown lunch counters, libraries, recreation centers, theaters, swimming pools and even all-white churches. Public demonstrations attracted national news coverage, led to mass arrests – more than 1,000 people were put in jail – and drew the most prominent of all civil rights leaders, Rev. Martin Luther King Jr., to Albany.[6]

In July 1962, four months after Elliott was sworn in as a federal judge, he was faced with a decision over whether to allow the growing Albany Movement to conduct a march through Albany. In Parting the Waters, historian Taylor Branch wrote that instead of ruling that segregation denied the rights of black people to equal protection under the law, Elliott ruled that marches and demonstrations would deny Albany’s white people equal protection by removing police manpower out of white neighborhoods.[7] Thus, when Elliot served as the federal trial judge for the Hattie Brazier lawsuit in February, 1963, he had given no indication he was prepared to part company with the prevailing Jim Crow attitudes.

In the Brazier case, Judge Elliott had before him some of Georgia’s best-known lawyers: Charles Bloch, who was somewhat of an anomaly as a Jewish white supremacist from Macon, represented defendants Cherry, McDonald, and Mathews. Representing Hattie Brazier were Donald Hollowell and C.B. King, among the few black lawyers in the state. Hollowell had just represented Charlayne Hunter and Hamilton Holmes in their successful effort to integrate the University of Georgia. King, unrelated to the family of Rev. Martin Luther King Jr. family in Atlanta, had a short and difficult track record with Judge Elliott: He had represented the Albany Movement when it failed to win a permit to march. King had spoken openly against Elliott’s judicial appointment. “The legacy of Talmadge is predicated on the word ‘nigger.’ And the appointment of Elliott, I assume, was his reward.”[8]

Throughout the James Brazier trial, Elliott more often than not sustained Bloch’s objections while ignoring or overruling King’s or Hollowell’s objections. Bloch objected to King asking Hattie Brazier why she had been fired from her job, saying the question was immaterial and irrelevant.  Elliot sustained Bloch’s objection.[9] When Bloch asked whether James Brazier’s father, Odell Brazier, had pleaded guilty at the Mayor’s Court, Hollowell objected, maintaining that it was irrelevant and immaterial because the record kept by the city as to what pleas had been made would be the best evidence.  Elliott overruled Hollowell’s objection, claiming that he “didn’t see how there could be any higher evidence than the man himself.”[[10]

At times throughout the trial, the atmosphere got tense between Elliott and Hollowell.   Hollowell, for example, seeking to show that Cherry’s trial testimony contradicted his earlier deposition, argued that Cherry had to state whether or not he told the truth during the deposition. Cherry said he did not remember what he had said during the deposition. When Hollowell asked Elliott to settle the issue by ordering Cherry to read aloud his comments from a transcript of the deposition, Elliott said that if Cherry didn’t want to read his previous comments, he didn’t have to.

Hollowell: Well, I’m showing it to him, Your Honor, and asking him whether he said this?

Elliott: He’s not required to read it unless he wants to.[11]

Although Elliott would say later that he thought of himself as a fair judge, he constantly frustrated civil rights activists.  After the Brazier case, Elliott continued to live up to his reputation as a staunch segregationist and against civil rights. For instance, the attorney for the Columbus branch of the NAACP, Joseph Wiley, noted that although Elliott did what was he thought was right, the result were not favorable to civil rights.[12] In fact, Elliott ruled against blacks in more than 90 percent of the civil rights cases to which he (Elliott) was assigned between 1962 and 1964.[13]  His decisions were frequently overruled by the Fifth U.S. Circuit Court of Appeals. In 1983, the American Lawyer ranked Elliott as the worst federal judge out of 64 federal judges in the 11th Circuit, which included federal judges from the states of Georgia, Alabama, and Florida.[14] The article said Elliott was “an old-line segregationist who flaunts his deep-rooted prejudices against blacks, unions, and criminal defendants.” Elliott’s response to the ratings was that he was “not a darling of the liberals.”[15]

The difficulties King and Hollowell faced in Judge Elliott’s court  – the jury took little time to render a verdict in favor of the law enforcement officers — were no surprise to the lawyers. King would tell American Lawyer in 1983 that in the 20 years he went before Judge Elliott and observed him on the bench, “There have been better than 50 civil rights cases in which I’ve been involved, either as principal counsel or of counsel, and I can’t recall a single instance where the relief sought was granted by Judge Elliott. It was always a matter of having to go to the appellate court. And with the exception of four or five of those cases, the circuit court either reversed or remanded.”[16]

In addition to civil rights cases, Elliott made a controversial decision in 1974 when he ruled that Army Lieutenant William Calley, the soldier who killed Vietnamese civilians during the My Lai massacre in South Vietnam, had not received a fair trial when he was convicted three years earlier. The judge freed him, but he returned to imprisonment when Elliott’s decision was later reversed. Elliott was also involved in other controversial cases, including the desegregation of the Muscogee County (Georgia) School District, a large environmental lawsuit against the DuPont corporation, and the annual protests at the School of the Americas at Fort Benning.[17]

The political tilt of the southern judiciary of the early 1960s made it difficult for Hattie Brazier to win her lawsuit.  The case occurred at a time when southern state courts and even federal judges many times ruled against desegregation and voting rights for blacks in the South.  A judge’s personal bias could affect the cases.  A majority of the federal district judges in the early 1960s had been born, raised, and educated in the South. Moreover, a 1965 report entitled Racial Discrimination in the Southern Courts by the Southern Regional Council revealed that out of 65 district court judges in southern federal courts, all were white males.[18]Some of them, including Elliott, also openly supported Jim Crow, and judges who challenged segregation encountered backlash from the white community.[19]

Moreover, although the Constitution establishes that the president shall appoint the federal judges with the advice and consent of the Senate, the roles are usually reversed.   One or two senators from a state select a nominee, the President appoints him, and the Senate confirms the nomination.  Political favoritism plays a role in the selection process, as described by Attorney General Griffin Bell, who became a federal judge in the Kennedy administration.  “Becoming a federal judge wasn’t very difficult,” Bell deemed.  “I managed John F. Kennedy’s presidential campaign in Georgia.  Two of my oldest friends were the two senators from Georgia.  And I was campaign manager and special, unpaid counsel for governor.”[20] Similar to Bell and consistent with the description of the selection of federal judges, “senatorial courtesy” helped Elliott land his career as federal judge.

Edited and supplemented by Hank Klibanoff