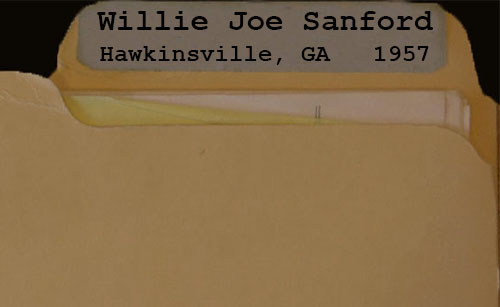 Willie Joe Sanford’s decomposed body was pulled out of Limestone Creek in Hawkinsville, Pulaski County, on March 1, 1957, after it had been in the water for nearly a month, trussed to underwater growth. His head had been struck with a sharp instrument and his body had many stab wounds. He had been missing a month. “Certainly it did not take a brave man or men to accomplish this execution,” Circuit Judge John K. Whaley said in instructing a grand jury. “Only a frenzied mob could have accomplished it.” He later called in reporters to clarify that while he thought at least two people were involved, he was not calling it a lynching.  The prosecutor, J. Wade Johnson, told a reporter he believed two white people had been involved in the killing, but said he did not think it was racially motivated. “Had there been a racial issue, it would not have been concealed. They’d have riddled him with bullets in the middle of the road or strung him up to a tree and made no effort to hide it.” The Afro-American newspaper reported that the local grand jury investigation had been “futile.”